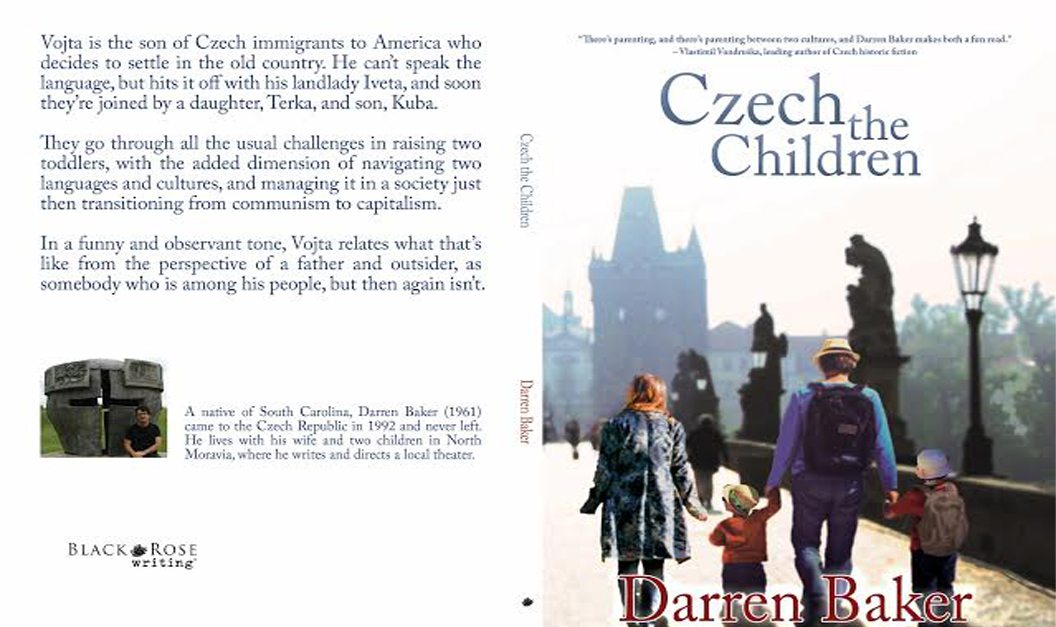 Czech the Children - Chapter 3-The most famous landlady in Czech literature appears in Kafka's The Castle. Now I've got my own landlady.

It sure didn’t look like it in the beginning. I arrived at the address with my colleague, he buzzed her address, and before I knew it, a ring full of keys came flying from seven floors above, smashing into the dirt next to the pavement. That was apparently how you let visitors into the building. The apartment itself was nice, with a large living room, single bedroom and kitchen, much nicer digs than the dormitory, but the furniture was really old. Perhaps rather rudely, I was moved to observe that the place reminded me of a museum.

This young lady noted the comment. She would in fact note it several dozen times over the next few years. Nevertheless, she felt we could do business. This called for me to pay her rent of $25 a month, which sounds like a steal until you realize that the school only paid me $100 a month.

Her name was/is Iveta, but I called her Veta from the get-go to match Vojta, but over time the American habit of one-syllable nicknames kicked in for me and she just became Vet. She had inherited the apartment from an aunt, but at that time she was just out of college and still living with her folks. It was a money-maker lying idle, and that was because in this country there are laws to keep landlords and ladies from evicting people just because they don’t pay their rent or you happen to want your place back.

Meant to prevent homelessness, the result is it could take years to move deadbeats off your property. In my case, I told her I was thinking of going somewhere else after the school year. She could collect rent for six months and be sure the place was empty after that time. So we agreed. Six months. And here it is twenty years later.

The thing is, Vet wanted English lessons in addition to rent. Like most Czechs her age, her dream was to travel around and she figured English would get her a lot farther than the Russian she had to learn in school. So we began these one-on-one lessons, but you know how that goes. I say something funny, she laughs, she says something funny, I laugh, she smiles, I smile, the face-to-face communication inching ever closer until we became a couple and she was finally living in her own home.

Her parents didn’t quite know what to make of it all. In TV, all Americans were rich, but this guy had only a backpack and radio. Sure, he had Czech parents, but he couldn’t speak the language and he was making his entire living from speaking a language they couldn’t understand. He said something about being able to repair air conditioners, but there were no air conditioners in this country. Did he have a police record, serve in the military as the young men in this country did, was he planning to ever go back?

I made all that simple for them: no, no, and probably no. In any case, Vet and I crossed the Atlantic at the end of the summer holidays so she could meet the rest of the family. This was still the time before visas were slapped on visitors from Eastern Europe and she had no trouble getting through passport control. It was a different story for me, however, as the very officious border clerk asked one question after another about what I was doing over there and what I was doing with this girl here. I got the impression he suspected I was a pimp bringing over beautiful young ladies to ply a trade.

Eventually he let me in and we met up with my mother and Leon, who took us out to dinner at a pancake house. The Czechs have their own style of pancakes for dinner, usually eaten with jam, so that wasn’t the first big oddity Vet had to deal with. It came the next morning when we woke up alone and found there was no food in the house. My mother and Leon mostly ate out or ordered in and forgot to switch the routine before we arrived. Since we hadn’t yet changed any money into dollars, it was shaping up to be a hungry first day in the land of milk and honey until we remembered the special Czech chocolate we brought along as a yummy present from abroad. In the bustle of settling in that first night, we hadn’t gotten around to giving it to them. So we snacked on that chocolate throughout the day, hid the packaging in our luggage, and hoped my mother wouldn’t mention anything about it in her nostalgic recollections.

She was all shame and sorrows when she got home and insisted we go to the supermarket that minute to stock up. Now she knew from her visit back home that these massive stores with their endless rows and aisles of gluttony had yet to appear in the Czech Republic, which by the way had separated at the beginning of that year from Slovakia. She probably didn’t realize she was being patronizing when she told Vet in Czech, “Look at all this food everywhere.” But when it came time to do some actual shopping, she kept searching for a certain type of butter, only it was nowhere to be found amongst the twenty or so other brands. She tossed stick after stick of butter aside, but all in vain. She was forced in the end to make do with less.

Things were also a little iffy with Leon there for a while. This guy was a Vietnam veteran and as a kid I could remember nothing made his blood boil more than the word communism. Although he was proud of my mother for having “escaped” from it, he was also likely to growl during one of their rows that he would “fix her little commie ass.”

Since Vet was the kind of person to speak her mind, whatever the politics of the room were, I warned her not to set him off if possible. Not to go telling him she grew up on a street named after Karl Marx and had once been a member of the young pioneers. He eventually found out about the latter, but didn’t hold it against her because he figured it hadn’t been her choice.

“You had to join these organizations in commie countries,” he flippantly remarked.

“Fine, but it still must’ve been terrible with all those uniforms and parades you had to march in.”

“Not at all,” she continued, “it was some of the best times of my life. We went camping, sang songs and ate sausages over the campfire.”

I could see Leon knitting his eyebrows and glaring at me.

“We made many trips. We even went to Moscow.”

“To Moscow?” he asked, unable to believe his ears.

Heaven forbid, a witness to the life-size wax impression of Vladimir Ilyich lying in state and she was sitting in his living room, and I knew all about it beforehand. Lucky for me, it was football season and Leon’s team got off to a great start during that visit, so we managed to finish up our trip without having to spend a single night in the hotel.

Back home, I went back to school and Vet to her office job at a kitchen retailer. The owner was this pudgy, middle-aged fellow named Boleslav. There was an unhealthy pinkish glow to his skin, so I figured he was either an alcoholic or diehard communist. Both it turns out, and he had been enough of a bigwig in the old days to trade on his connections with other comrades to score big in the privatization program, to gobble up former state industries without putting up any real money. So in fact, it was the former commies who were largely responsible for all the cutthroat capitalist robberies taking place, but they were still happy to blame it all on the “imperialists” of the West.

I got an idea of just how shameless these people were when it came to our first Christmas together. One of the cherished traditions of the old way of life was the Christmas bonus, which couldn’t be called that because religion was frowned upon, so it was known as the thirteenth wage, one extra month’s pay at the end of the year. Like everyone, we were counting on this money for our holiday shopping, but Boleslav had other ideas.

He had a friend with a bakery that was doing lousy business, and since the friend had all these cakes she couldn’t move, she convinced him to buy them for his employees as their year-end reward. Nobody was happy about it, to be sure, but there was nothing they could do about it, either. Like the thirteenth wage, job security was also a thing of the past. Now there was just this cake, and the icing on top, you might say, was that it was monstrous, tasteless, and sticky as hell. It had all the hallmarks of a good old-fashioned Marxist dessert.

Then there’s Vet’s mother, who, like most homemakers in this region, makes some excellent Christmas cookies. But I do have to say I don’t get the point of it all. These ladies, and it really is only the ladies, spend endless hours designing, crafting, and building every single cookie, whether it’s a chocolate-covered cone stuffed with cream brandy or a hard mini cruller with a buttery glaze. They look heavenly, but because they also taste heavenly, they disappear as quickly as they appear on the plate. It’s the most incredibly fleeting experience with triple digit calories you can imagine. On the other hand, the American-style cookies I baked fell completely flat. The consensus was they were a bunch of boring, round, crumbly disks, each with the same color and flavor. You couldn’t get more communist in your engineering than that, they joked.

They had me there, but nothing could make their Christmas dinner anything more than the fish and potato salad that it was. And not just fish, but carp, perhaps the boniest animal on the planet. The moment I dug into it I felt like I was on an archaeological site, removing one encased bone after another and piling them high on the side of the plate.

The potato salad was much more welcome, even if it was the first time I ate it outside a picnic. Vet’s family loves Christmas potato salad, so much so that they even brought a huge jar of it when we invited them over the next day for an American-style Christmas dinner. They clearly enjoyed the turkey, stuffing, and gravy on top, but they still couldn’t get enough of that potato salad.